Issyk-Kul is the largest region of Kyrgyzstan and its most popular tourist destination. 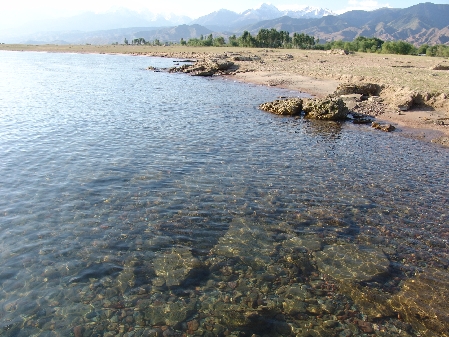 The region is situated around Lake Issyk-Kul, the world’s second largest alpine lake, after Titicaca, 1600 m above sea level, 170 km long, 70 km wide and 695 m deep. “Issyk-Kul” means “hot lake” in Kyrgyz, as it never freezes. The mountains and the marine microclimate produce a wild, unique environment. The mountains surrounding the lake are a shelter for very rare animal species (snow leopard, cutter-loader, wild boar) and plants, such as the Tyan-Shan fir. Impetuous, violent rivers, starting from snow-white glaciers, carry their waters to the lake. In 2001 Issyk-Kul was designated by UNESCO as a Man and Biosphere reserve.

Issyk-Kul offers the highest, snow-capped peaks in the country; and the opportunity to trek, cycle, climb, ski, raft, windsurf, tour on horseback or just relax at one of the famous coastal resorts.

Lake Issyk-Kul (“Ozero Issyk-Kyl” in Russian), is a drain less lake in the northern Tien Shan (mountains) of Kyrgyzstan, and one of the largest mountain lakes in the world, and is famous for its magnificent scenery and unique scientific interest. It has length of 113 miles (182 kilometers), a width of up to 38 miles, and a surface area of 2,445 square miles (6,332 square kilometers). It reaches 2,303 feet (800 m) and its name, which derives from a word for “hot lake”, alludes to the fact that it does not freeze over during the winter, even though the lake is situated at an altitude of 5,278 feet (1700 m). More than 50 rivers can be counted in the basin.

The Issyk-Kul shores open out gently, with coves on the eastern and southeastern sides. Sandy, silt-phytogene soils predominate. 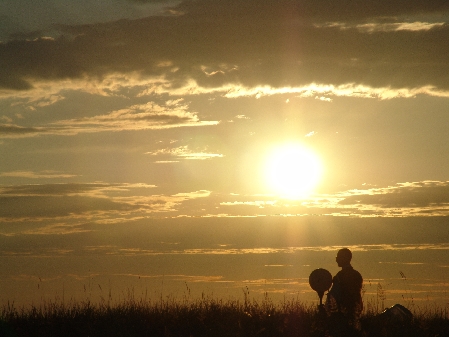 Lake terraces stretch along the shores, indicating a higher water level in the past, and the presence of underwater ruins of buildings at depths of up to 23 feet (8 m) testifies to the past that in the Middle Ages the level of the lake was lower that it is now. The water temperature in July on the surface is a comfortable 68° to 73° F (20° to 23° C), and in January it is 36° to 37° F (2° to 3° C).

The water of the Issyk-Kul is clear blue in color with a visibility of up to 60 feet (20 m). Unsuitable for drinking and irrigation because of its high mineral content, it is used at times without freshening for watering cattle. Rocky deserts with sparse, saline vegetation form the western part of the basin. Toward the east are steppes and meadows and a type of elm that grows in the chestnut soils and black earth.

Higher up in mountains, sub alpine and alpine meadows occur. Forests of fir are located on the northern slopes of the Terskey Alatau Range. More than 20 kinds of fish live in Lake Issyk-Kul. The basic commercial fish are the naked “soman”, the “chebak”, the common carp and the “marinka”. The western and eastern shores of the lake serve as a wintering place for waterfowl gathering there in flocks of 20 to 50,000. Mallards, bald coots, and teals are the main varieties. By the early 1970’s, some 300,000 people were residing in the Issyk-Kul Basin.

Kyrgyz and Russians predominate; but there are also many Ukrainians, Tatars, Uzbeks, and Dungans. There are two large cities-Karakol and Balukchu-and hundreds of villages. The majority of the population is concentrated in eastern Priissukkul. Regular boat trips are made across the lake carrying freight and passengers, and the area is joined with other regions by highways, railways, and air transportation. The shores of the Lake Issyk-Kul are noted for their health resorts, and sanatoriums and holiday houses abound. The northern shore is the main health resort area with center in town of Cholpon-Ata, but in mid-1970 the entire lake region began to develop as a vacationland for visitors mainly from Central Asia and Russia. —> See also this map of Kyrgyzstan from Lonely Planet.

A large part of inhabitants are farmers. After the collapse of the Soviet Union, almost all industries ceased to exist. Main means of transportation is with horses and donkeys pulling wooden carriages. Due to the mild climate fruits grow in abundance, and trees filled with apricots, pears, apples and peach are inviting us to try the sweet and on the spot. As there are too many fruits anyway, nobody cares to let a passing by visitor steal a few.

Towards the larger city of Karakol, peasants are also selling the sweetest and best quality of their fruits: a kilogram of apricots costs 1 Som (about 2 cents). Melons, dried fish from the lake, grapes and chestnuts are very popular here as well. Prices for us are unbelievably low. Still with an average monthly salary of 25 dollars, a kilogram of apricots at 2 cents must be expensive. Some dealers also buy in large quantities and transport the fruits over rough roads into 700 km close capital Bishkek or even further into Kazakhstan.

Every Sunday morning, the city of Karakol, with 90000 inhabitants the largest dwelling at the lake’s shore, features a famous animal market. Already at 5 a.m. in the morning, farmers from the nearby region bring their cattle, sheep, milk cows, donkeys, horses and pigs to the market place in order to sell their beloved farmer’s animals. The picture must remember medieval times, with hundreds of wooden carriages lining up, the animals to be sold tied on top or chained to the carriage. Many farmers come from very distant places and have taken several hours to arrive here.

Naturally, the richer farmers transport their animals with tractors or by cars. Have you ever seen a cow being transported on a motorcycle or in a car? Visit this farmer’s market and you will everything impossible. At 9 o’clock leave in the morning, after hefty negotiations, most are leaving the market place again, with plenty of cash in their pockets or newly acquired properties on their carriages. Supply is plentiful and prices very low.

A milk cow is about 40 USD, a two-week pig 10-15 USD, a two-year-old horse between 300 and 400 USD. Still little fortunes considering the peasants low income. We are almost inclined to buy a few horses, ride into the mountains for a week and resell them at the next occasion of the market in a week’s time. Finally, we decide that we will explore the nearby mountains on feet given the experience with Kyrgyz horses at the lake Song Kol.

The surroundings of Karakol gushes any hot sources, which were used in Soviet times to build large sanatoria for the party elite. In Jeti Ogyz and Altyn Arashan, we visit an enormous sanatorium, which mostly even the presidents (Yeltsin and others) as a place to recreated. Along the lake, another 300 sanatoria are said to exist. However, most of them are closed, as the party leaders prefer to recreate overseas.